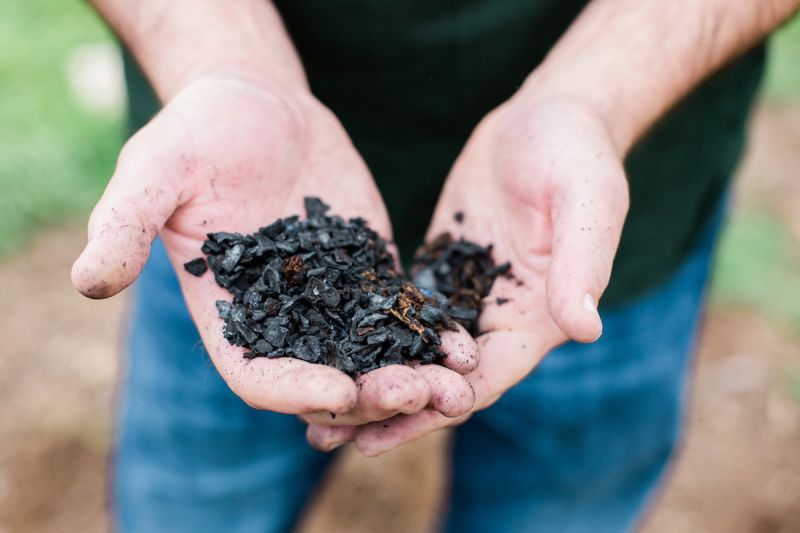 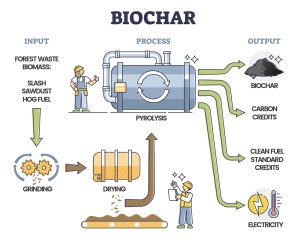 How do we add value to agricultural waste and continue our mission to sequester carbon from the atmosphere? For World Tree, the answer may be biochar.

Biochar is a carbon-rich and highly-porous substance that prevents large amounts of carbon dioxide from entering the atmosphere. Produced through a process known as pyrolysis, biochar can improve soil quality by providing increased aeration, nutrient retention, and water-holding capacity—allowing crops to better deal with floods and droughts. The process of pyrolysis involves heating biomass, organic matter that is derived from plants, at a high temperature in an environment lacking oxygen, which creates biochar and other byproducts such as methane and nitrous oxide. Those gases can be captured and utilized as another form of clean energy or as fuel for the continuation of the pyrolysis process.

When used as an amendment to soil, biochar generates conditions that increase soil fertility. Crops grown on biochar-enriched soils can increase their yields by an average range of 10 to 40 percent. Biochar’s porous structure permits greater nutrient retention, while providing the space for beneficial microorganisms to thrive. This porosity also enables increased aeration and water-retention, which reduce irrigation needs and strengthen the resilience of crops during floods and droughts. Because of all of these benefits, biochar reduces the need for chemical fertilizers and prevents additional greenhouse gas emissions that would occur during the manufacturing process.

Critics of biochar often point to the fact that biomass is a necessary component for pyrolysis. Just as an increase in the use of biofuels has exacerbated climate change through a rise in deforestation, biochar could do the same. That is to say, biochar is only a sustainable solution if the biomass that is utilized is agricultural waste. At World Tree, we propose to solve this problem by creating biochar from parts of the Empress Splendor tree that cannot be used for lumber. At least 30 percent of a tree cannot be sold as lumber, and forestry companies often use this 30 percent to produce mulch, paper products, particle board, or sawdust, which in turn fires their mills or kilns (ours will be powered by solar and other renewable energy sources). We believe, however, that this 30 percent could better serve our mission—to limit and reverse the effects of climate change—as biochar.

Keeping carbon out of the atmosphere

How, precisely, does biochar sequester carbon from the air? While some sources claim that biochar draws carbon from the atmosphere, this statement is not entirely correct. Rather, the actual sequestration occurs while the biomass is still living (while a tree, such as the Empress Splendor, is still growing). However, though the carbon may be sequestered within the biomass, it remains unstable. Should the plant decompose or be destroyed, the sequestered carbon would return to the atmosphere. (This reason is why World Tree has actively chosen to sell its lumber to companies that plan to use it for non-disposable items or permanent and semi-permanent products and projects.) On the other hand, once the biomass is converted to biochar, the carbon is stable. By putting the biochar in the ground, the carbon it contains can remain sequestered and out of the atmosphere for centuries, possibly even millennia.

Biochar’s ability to sequester and stabilize large amounts of carbon makes it highly valuable. Because 1 tonne of biochar prevents about 3 tonnes of carbon dioxide from entering the atmosphere, biochar carbon credits often demand a higher price than most other projects within the carbon market. Puro, a marketplace that sells carbon removal products, has listings for biochar between about $100 and $200 per tonne of carbon dioxide sequestered. While sellers on this platform set their own prices, these prices also reflect biochar’s utility in mitigating climate change.

World Tree is committed to a sustainable, regenerative, and carbon neutral future. In order to achieve this future for the world, we recognize that we must bring together a wide variety of climate solutions. Through our sustainable lumber farms, we sequester carbon in our trees while also minimizing extensive logging in old-growth forests. Through supporting regenerative agricultural practices, we prevent land depletion, advance biodiversity, crop diversity, and soil resiliency, and further our carbon sequestration commitments. Through everything we do, we continue to attempt to maximize our positive impact on the world. We believe that biochar is one of the many ways we can continue to deepen our contribution. And, it’s why biochar will almost certainly be part of our projects in the future.

For more information, take a look at our sources:

as a part of the CEO Insights Series

Sharing insights into new and ongoing developments within the sustainability sphere, as well as our own progress in deepening World Tree’s contribution.