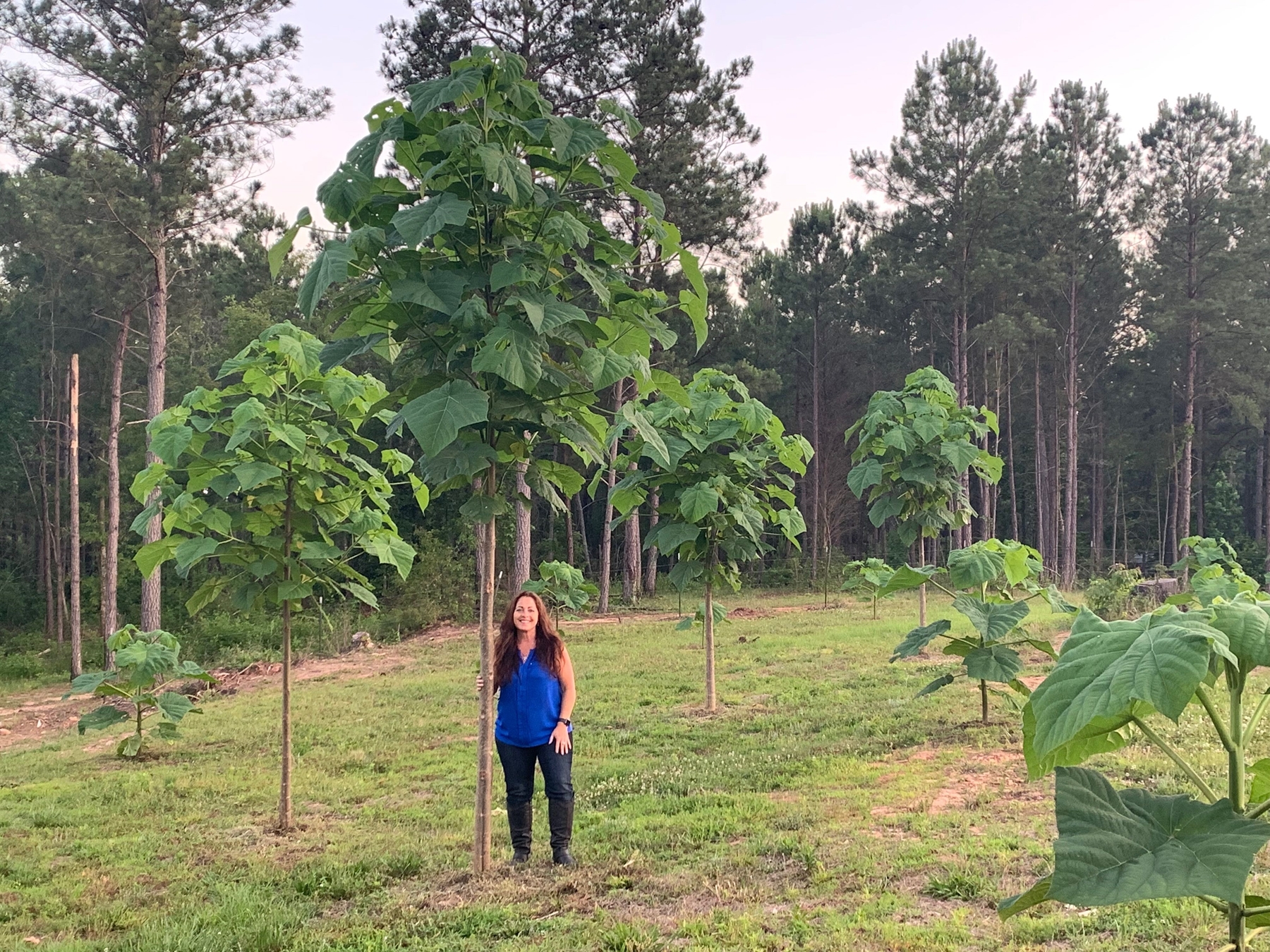 Wendy Burton, our Founder and CEO has been all over the map recently visiting our farmers and developing new relationships

In the middle of May, Wendy began her journey to the southern United States, to both Alabama and Georgia. Her first visit was with Grover and Wendy Plunket to take pictures of their one year old Empress plantation; which was doing great. After spending the morning at the Plunkets’ beautiful farm, Wendy headed off to Montgomery and met with Scott at Southern Growers. She was delighted with his operation and the level of expertise and attention he gives our baby Empress trees before they leave the nursery.

For the next leg of the trip, Scott sent her off with a bucket of blueberries to snack on, her very favorite fruit! Next, Wendy booked it down to Eugene Martins’ to capture his trees at sunset. She was not disappointed and glad she pushed it to be able to see the setting sun on the Empress trees. She also got to meet Eugene’s amazing daughter, Kim, who is supporting her father during this venture. Kim is developing a business model to intercrop other plants along with the Empress in order to create secondary revenue streams for farmers.

The Treelady had a short stop at home before flying to New York where she met at the United Nations to be interviewed about climate change in relation to the UN’s 17 Sustainability Development Goals. During this time, our team members Nick and Mariana were busy visiting both new and old farmers in Costa Rica. Wendy was able to arrive a few days later and had the honor of joining them at the Herberth Chacón plantation. This is one of her favorite coffee/Empress plantations because of the amazing views it offers. Hoping to beat the afternoon rain, they headed to Oscar Viquez’s plantation, and as luck would have it they arrived during one of the rainiest days the team had while they were there visiting farmers.

Wendy stated, “though I had many highlights during my travels, meeting and developing new relationships with the farmers in Las Vitas would be close to the top of my list. The people of this region, the area and the food were all so incredible!”

The Empress plantations here are intercropped with plantains, beans and Chinese potatoes along with other shade crops. The diversification in their land was very impressive.

Wendy didn’t stop there! She met with Carlos Montero, who will be introducing World Tree to several large scale plantations in Costa Rica.

Lastly, the World Tree team found themselves in Guatemala, where they met up with our current partners and were introduced to a COPA of new land owners. In the beginning the large audience appeared skeptical but by the time they had a chance to meet the World Tree team and enjoy a presentation by Wendy, Mariana and Nick, every single farmer was impressed and ready to sign up! Now, World Tree, along side our partners, will need to begin propagating enough trees to facilitate the immense interest of our new farmers.

Amidst all of the traveling, and now back at home on the island, our Founder had this message to pass on:

“I can’t begin to tell you how moved and inspired I am to know so many wonderful farmers that have come into the eco-tree program. Thank you for your hard work and commitment to the planet. I truly appreciate each and everyone of you.”