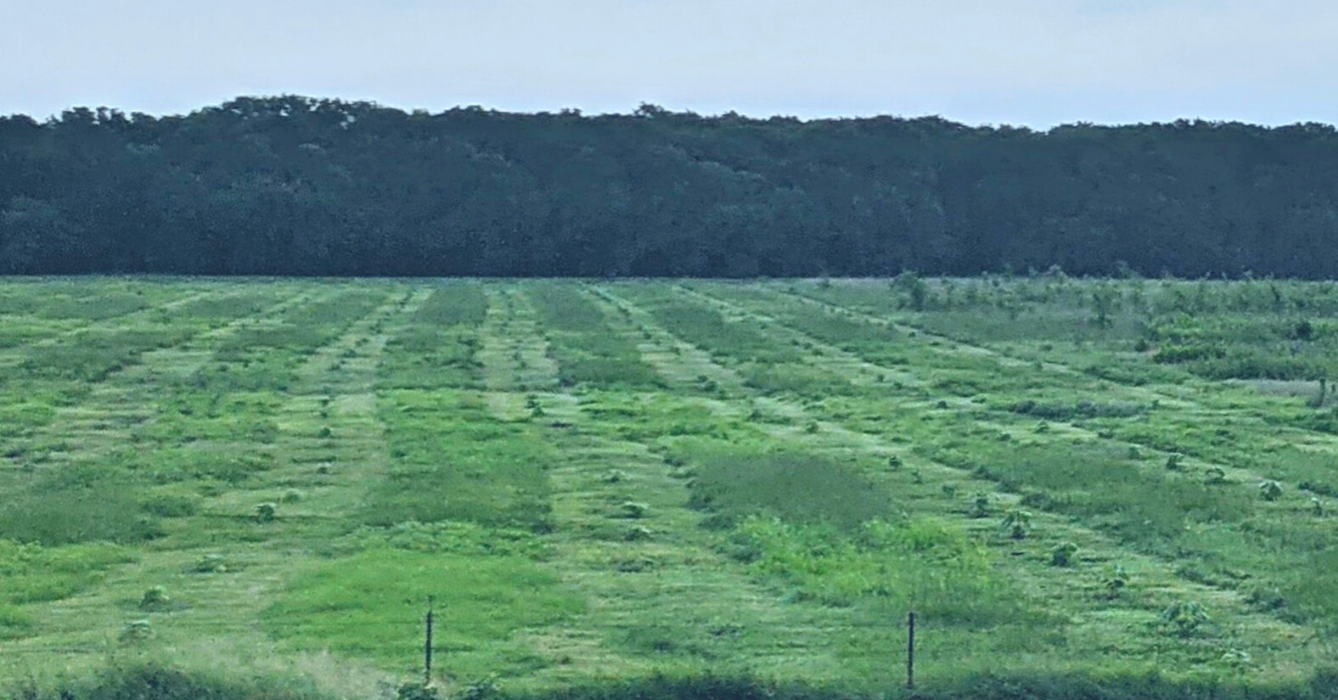 Two engineers are marrying their science knowledge with their Eco-Tree farming adventure.

Loren and Scott Raymer are two of World Tree’s new farmers for 2021. They planted 10 acres of Empress Splendor trees on their recently acquired property in eastern Texas, not far from Dallas. This location gives them the distinction of being World Tree’s most westerly farmers in the Southeast USA.

Native Texans, Loren and Scott met in high school and have now been married for 10 years. They both have engineering degrees and careers in the tech sector. Scott has taken some time off to run their new Empress farm, but Loren continues to work at her job with Texas Instruments.

Loren never thought of herself as ever becoming a farmer, but she’s learning to love it. “It’s been a huge learning experience and not something I ever thought I would personally do… It’s a hell of a departure from what I thought I would be doing, but it’s [been] great,” she remarked.

How they discovered the Empress 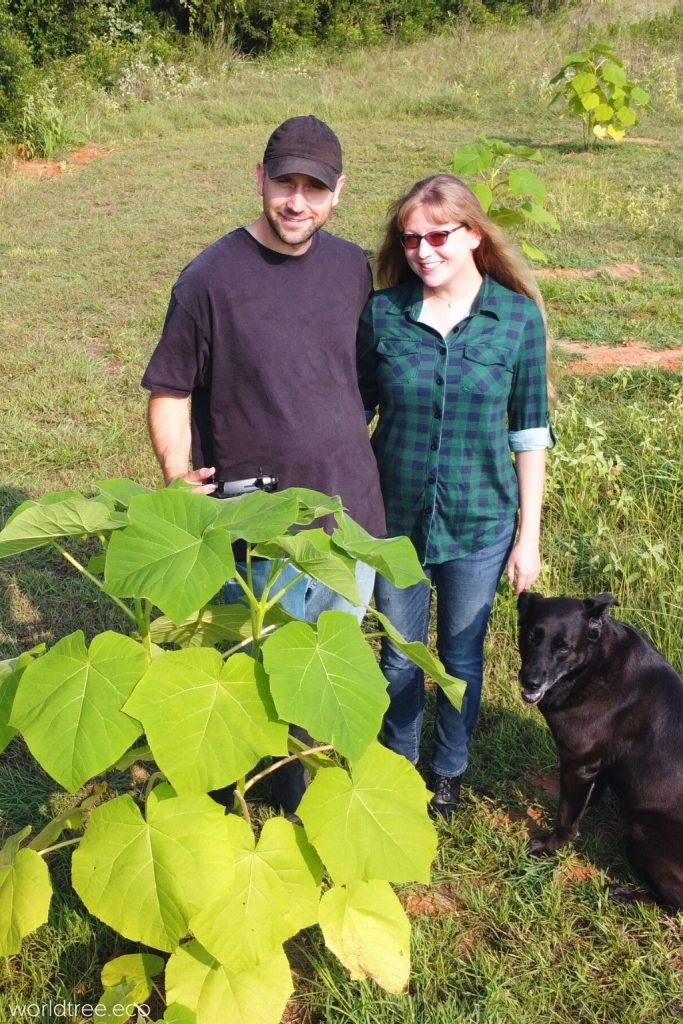 With their engineering backgrounds, they describe themselves as being very “data-driven” thinkers and planners. When they decided they would like to try tree farming, their meticulous research led them to World Tree and the Empress Splendor tree.

Scott discovered World Tree by researching different kinds of trees to plant that could survive and thrive in his area. The Forest Service websites he found only endorse 3 or 4 types of trees in Texas, including pine, which seemed to limit their options. Like many World Tree farmers, the thought of having to wait up to 40 years for pine to mature just didn’t appeal to him.

Scott found information on Paulownia (Empress) trees and was intrigued. “I saw that one type of Paulownia was on the banned list, the tomentosa, so that led me to ask, well what are the good types of Paulownia that are more agriculture-friendly?” They contacted World Tree for more information and sought advice on what type of land to purchase that would be most suitable for the trees.

Scott went further, “Paulownia really ticks all the boxes for the fact that it grows back from the stump after you cut it down, the water requirements, the style of wood I feel is a very utilitarian…because it is so light and yet hard, and can be used to make instruments and furniture… I wanted to grow something that was better than the standard, and this plant really delivers on that.”

The land and planting.

Like many new farmers, Loren and Scott experienced some challenges learning how to prepare their land for planting, the planting process itself, and how to best to care for the Empress saplings during their first summer in the ground. Scott said, “It’s been ‘mind-spinning’ learning the complexities and mysteries of farming… Things can’t be perfect, but that’s not how our mindsets work.”

They were particularly surprised at what an exacting science it was to plant the trees on the 20’ x 20’ grid system recommended by World Tree. Loren explains, “…20 x 20 feet doesn’t seem like it would be that hard. But we got satellite images and we tried marking them with GPS coordinates, but that didn’t work very well.” After trying a series of technology-based methods, they determined what they thought would be a perfect methodology using pre-measured string with 3 people out in the field and water-soluble paint, but even this proved challenging. “I thought we were doing really well and got a couple of rows done when Scott said that something didn’t look right. We then realized we’d been pulling on the same piece of string for 2 days, and it had gradually stretched out meaning the holes were getting further and further apart, up to 26 feet from the original 20!” They ultimately tried fishing line that does not stretch, and that did the trick.

Adapting to variances in soil conditions and ever-changing weather systems were also things they needed to learn how to do, and quickly.

They had selected their property partly due to its high-water table, but the heavy rains they experienced this spring flooded parts of their land and they feared they would lose some trees. Instead, they are learning how resilient the Empress can be, and most came back when things dried up. The challenge now is to create an efficient watering system to keep the young trees sufficiently hydrated over the dry summer season.

A family and community affair

Loren and Scott hosted a planting party as part of a family reunion. They did their best to make it a fun experience. People got to pick their own tree, write their name on a rock, and place it at the bottom of the tree. 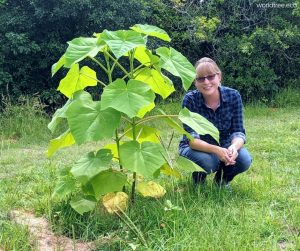 Loren alos plays a game with people she works with by creating a grid-like sheet, similar to a bingo card, with each tree being in its own square and asking people to pick one to call their own. She then sends them updates on their trees and people are betting on whose trees will grow the fastest. “It’s something that has turned more into a community project than anything else. It’s the first thing people ask at the beginning of meetings, ‘How are the baby trees?’”

Loren and Scott are grateful for all of the support provided to them by the Farmer Team at World Tree. Loren went further to say, “It was kind of magical to find a company that provided so much support, especially for those of us who have no farming background. For me, the support structure that World Tree has in place was half the selling feature.”

They also felt the contract was more than fair. “Even the comments in the contract were so nice and open, good for us as the growers, the language was polite and basically said that unless the trees died of our own negligence, we were off the hook.” This gave these first-time farmers a lot of peace of mind as they embarked on their new venture growing Empress trees.

Scott has some advice for anyone considering becoming a World Tree farmer, “Be prepared to really take care of your investment for the first year or two. And be prepared for a lot of physical labor and have a plan in place to get support at critical times… Even if you are investing alone, it doesn’t mean you need to build the investment alone, especially during the establishment of the farm.” Have people you can call on for help and budget in paid labor if you think you will need it.

Overall, despite the hard work, both Loren and Scott feel the effort has been worthwhile. Scott concludes, “I feel so much better knowing that the investment I am putting my money and time into, I can walk out and see. I can see that it’s growing and, unlike the stock market, I know it’s not going to crash tomorrow.”

Loren also loves the trees themselves, “We have a balcony on the house that looks straight out at the field. In the morning we can walk out and see the little trees waving back; it’s really cool seeing that.”

If you would like more information on the World Tree Eco-Tree Farming Program, please go to www.worldtreefarmers.com.