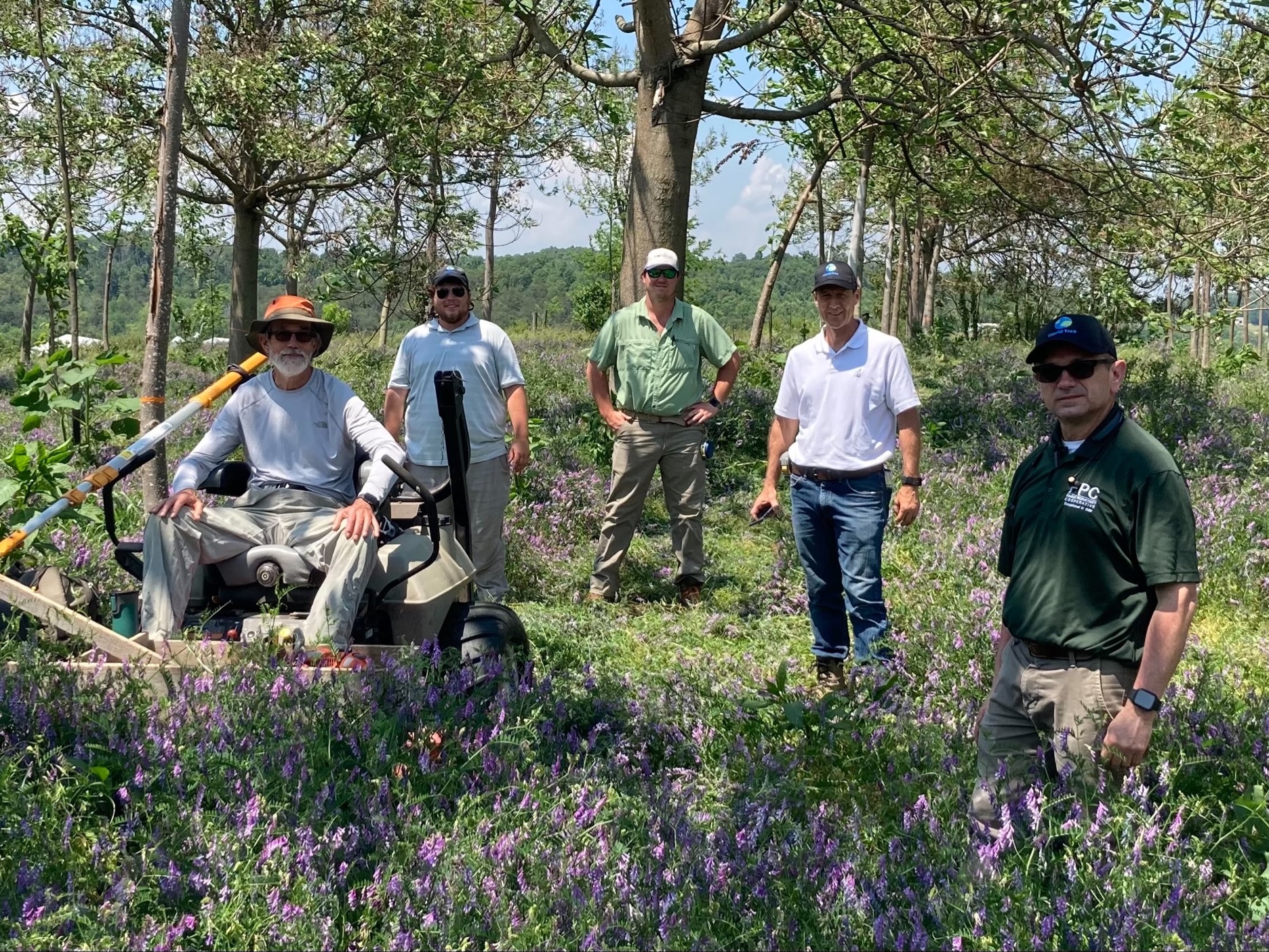 With over three decades of experience, this tree farmer is excited for the future of Paulownia lumber.

David Sutton has been growing Paulownia (Empress) trees in Tennessee since 1988, making him one of the most experienced growers in the Southeast. While David is not a partner farmer in World Tree’s farmer program, he has been working with us as a consultant. We are grateful that he is generously sharing his vast experience growing Paulownia, lessons he has learned on how to grow the healthiest trees, and how to produce the most valuable lumber possible. His expertise is extremely valuable to everyone involved in the Eco-Tree Program. 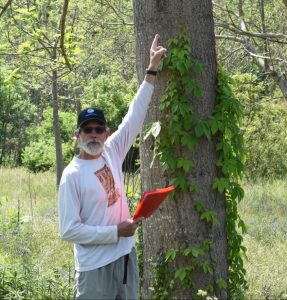 David Sutton with a 10 yo Paulownia

A dentist by profession, David has been practicing part-time since 1983 so that he could devote more time and energy to being on his land growing trees. He grew up in a farming family, studied agriculture and biology in college, and feels most comfortable being outdoors. David estimates he has cultivated over 90 acres of Paulownia on his land. He is currently growing about 30 acres, which he feels is enough to manage on his own.

It all began when, as a hunter, he was looking to enhance his property to attract more deer. His first trees were walnut, but he quickly fell in love with Paulownia and became determined to learn more about this relatively new and fascinating addition to tree farming in the United States. A true pioneer by nature, one of the things David really loves about his Paulownia varieties is that they give him opportunities to innovate and learn how to manage the species.

David has commented, “One of the many reasons I enjoy Paulownia is that it makes me think outside the box…. Back in the 1990s, there was very little information available on the tree, so I had to do my own research.”

His interest and passion for the tree continued to grow, and he became the founding president of the American Paulownia Association in 1991, and continues to be involved today as a lifetime member.  Since then, he has traveled the world learning more about the tree and has even consulted in China where the tree is estimated to have been cultivated for over 2,000 years. He continues to learn from research papers published around the world and from other growers.

David has grown many different species of Paulownia including P. elongata, P. fortunei, P. tomentosa, and P. kawakamii, as well as hybrids of multiple species. He has also experimented with many different types of propagation techniques from seeds to root cuttings.

In general, he has found hybrids to be very ineffective at propagating themselves via seed. Those few that do germinate produce weak trees, so he prefers the method used by World Tree of starting with root cuttings or tissue culture. Because of this difficulty in propagation by seed, hybrid Paulownia presents almost no risk of spreading and establishing itself beyond the managed planting area.

He has also tried growing on different spacing grids by experimenting with planting a tree every 30, 12, or 5 feet. Through these experiences, it has become clear that the trees with the most spacing around them produce the largest diameters, leading to David’s practice of thinning areas over time so that the best trees can reach their full growth potential. In ideal soil conditions and with proper care, David has witnessed his trees grow 2 to 4 inches in diameter every year.

Overall, David has learned that growing Paulownia is much more like growing an apple orchard, rather than a pine plantation. It takes work and careful monitoring of the trees’ needs to grow healthy trees that produce top-quality lumber.

One distinguishing feature is the fact that healthy soil with the right moisture content is particularly important for this type of tree. David has found that planting cover crops, like winter wheat and hairy vetch in between the trees during the summer, really helps keep moisture in the soil and reduces weeds. He, also, spreads night crawler earthworms around the trees. The worms crawl to the surface at night and go back down during the day creating a lot of aeration in the soil allowing moisture to get in. The worm excrement is another form of fertilizer as well.

David has found that the young trees are susceptible to damage from strong winds and rain, as well as from certain insects such as carpenter ants and stink bugs. As with any crop, the tree farmer needs to carefully monitor their trees and deal with problems in a proactive manner.

David summarizes the tree this way: “The bottom line is that the tree has a lot of potential if planted in healthy soil with the right genetics. But the truth is, it can do hardly anything at all in the wrong climate, wrong soil, and wrong genetics.”

In terms of the final product, the lumber is extremely light, strong, and versatile. David has primarily been selling logs to the local market of chainsaw carvers in Eastern Tennessee, but also sells sawn lumber to luthiers and paddleboard manufacturers.  Not only does he harvest and mill the lumber himself, but he has constructed his own kiln to efficiently dry the lumber as well.

David is eager to have a partner like World Tree on his side when it comes to further developing a domestic Paulownia lumber market. Rather than a shortage of demand in the US, he says that the shortage and inconsistency in the supply of lumber is the main problem, and that the market has a lot of room for growth with many producers working together. This is his main reason for working with World Tree, “Long term growth in the markets is highly dependent upon the supply.  I feel World Tree has the capital and resources to increase the supply to feed the developing markets.  This benefits the entire Paulownia community.” 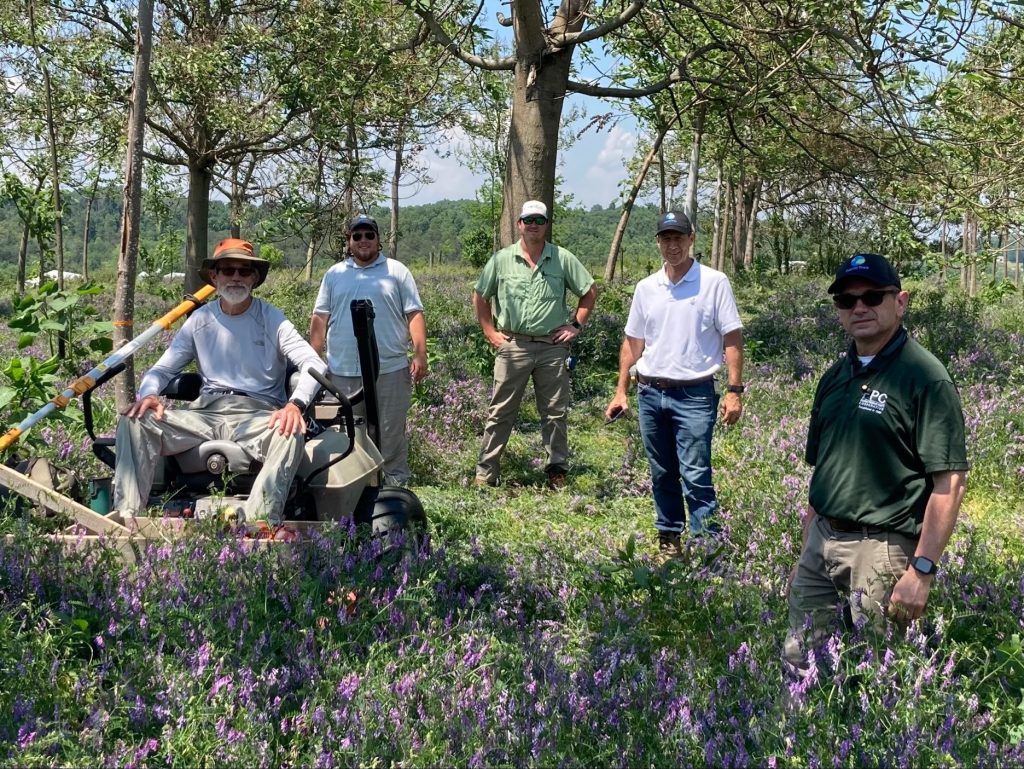 David has also been experimenting with different ways of making biochar from Paulownia branch cuttings and leaves. Biochar is created when all the organic matter is burned away in a low oxygen environment, leaving a very carbon-rich, charcoal-like substance. It makes an excellent soil amendment that feeds the trees and stores the carbon in the soil for thousands of years.

Branches and leaves can also be put through a wood chipper to make Ramial wood chips. This mulch makes an excellent soil amendment for trees and other crops, including garden vegetables. David says the key to success is to use branches less than 2 inches in diameter so that they contain a lot of nutrients, but not a lot of wood fiber. He recommends initially leaving the chips in a pile long enough so the fungi have a chance to start growing.

David continues to run a successful business based on Paulownia lumber, seeds, root cuttings, and consulting. We look forward to working with David for many years to come as we share successes, failures, and new ideas on how to bring Paulownia to the U.S. and global hardwood lumber marketplaces, and increasing the domestic supply.